Worry beads or komboloi, kompoloi (Greek: κομπολόι, κομπολόγια) is a string of beads manipulated with one or two hands and used to pass time in Greek and Cypriot culture. In modern times the komboloi are often not only designed for religious or ceremonial purposes but also for fun and relaxation. A handmade komboloi is a very attractive and public demanding jewellery now a days.

The Komboloi may be one of the most typical symbols of the Greek easy-going mentality that has been widely established both in Greece and Cyprus since the middle of the 20th century. Yet the history of the komboloi and its origins date back to time, when monks in Mount Athos began making strands of beads by tying knots on a string at regular intervals in order to say their prayers to God. However, in modern times the komboloi is not designed for religious or ceremonial purposes but rather for fun and relaxation.
Whether on the street, on the airplane or in a busy coffee shop downtown, you will find people playing with their worry beads in different manners, flips and tricks, thus letting go of their stress and worries as one bead moves deliberately towards the other. The pleasure of the action and the clicking noise of the beads turns the overall performance in an easy motion that is reported to help ease tension.

Komboloi Use
Worry beads have several uses in Greek culture, including:

Many prominent Greeks were users and collectors of worry beads, including Prime Minister Andreas Papandreou and business magnate Aristotle Onassis.

Until some decades ago the komboloi as well as the begleri (half-worry beads) were only used by men (and still used only by men in rural Greece). Women who used them, especially in public, were disapproved of, but things have changed and the komboloi has become sort of a fashion accessory very popular with both sexes. The fact that the komboloi keeps your hands occupied, has been promoted as an excellent way to quit smoking.
Melina Mercouri was an exception, often handling a silver strand in public as she fought for recognition of Greece’s cultural sovereignty. Modern young Greek men would disdain carrying them. But now, as they transcend cultural tradition and become a fashion accessory, both men and women are carrying them. Beautifully crafted strands are appearing in fine jewelry stores, and older strands are becoming prized collector items.

Features
Worry beads may be constructed from any type of bead, although amber, amber resin (such as faturan), and coral are preferred, as they are thought to be more pleasant to handle than non-organic materials such as metal or minerals.

Greek worry beads generally have an odd number of beads (often one more than a multiple of four, e.g. (4×4)+1, (5×4)+1, and so on, or a prime number, (usually 17, 19 or 23) and usually have a head composed of a fixed bead (παπάς “priest”), a shield (θυρεός) to separate the two threads and help the beads to flow freely, and a tassel (φούντα). Usually the length of worry beads is approximately two palm widths.

Usage
Worry beads can be handled in many different ways. 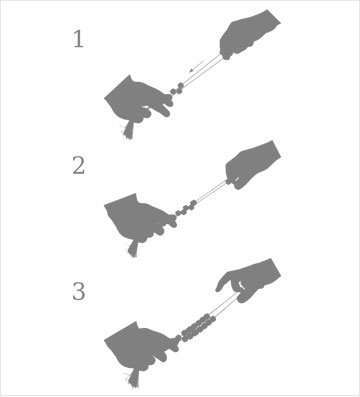 “Quiet” method. The most common are a quiet method, for indoors, and a noisier method that is acceptable in public places. The most common quiet method is to start at one end of the thread or chain, near the shield, and to pull the thread forward using that hand’s thumb and the side of the index finger until one of the beads is reached. Then the cord is tipped so that the bead falls and hits the shield. This is repeated until all the beads have been tipped and then the user starts over. 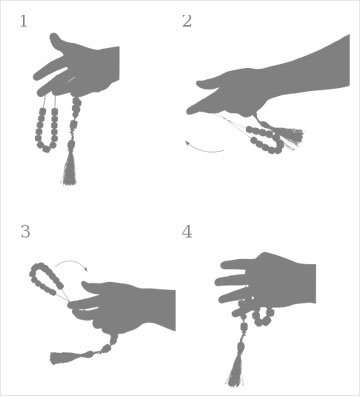 “Loud” method. The second, louder, method is to divide the beads into two groups. On one end is the shield and a small number of the beads. On the other end is the rest of the beads. Where the two threads are empty, that space is laid between the index and middle fingers. The hand should be in a position where the palm is facing the torso. Then the end behind the hand is swung up and forward so that it hits the other beads, making a noise.

The threads are then switched back into the space between the index and middle fingers by holding the threads between the thumb and the side of the index finger. This is repeated rhythmically, creating a louder clicking noise than the quiet method. Another method is to hold all of the worry beads in one hand and roll them against each other, creating soft clicking sounds.

Representing the traditional komboloi from Greek and Cypriot culture, the komboloi that our Fathers and Grandfathers were holding and playing, with respect and honor. We like to pass this tradition to younger ages.